Afghan woman beaten to death by mob, set on fire and thrown in river

Afghan women rights activists carry the coffin of 27-year-old Farkhunda, during her funeral, in Kabul, Afghanistan on Sunday. (Source: AP)

An Afghan woman who was beaten to death by a mob was buried in Kabul on Sunday, her coffin carried aloft by women’s rights activists.

Hundreds of people gathered in northern Kabul for the funeral of 27-year-old Farkhunda, who like many Afghans is known by only one name.

An Afghan civil society activist is comforted by a man as she mourns during the funeral of Farkhunda. (Source: AP)

She was killed on late Thursday by a mob of mostly men who beat her, set her body on fire and then threw it into the Kabul River, according to police accounts. Police are still investigating what prompted the mob assault.

Following allegations that police stood by and did nothing to stop the fatal attack, Ghani said it revealed “a fundamental issue” – the country’s police were too focused on the fight against the Taliban insurgency to concentrate on community policing.

His comments followed wide condemnation of the killing.

In Afghanistan, women are generally regarded as inferior, despite constitutional guarantees of equality. Violence against women often goes unpunished. 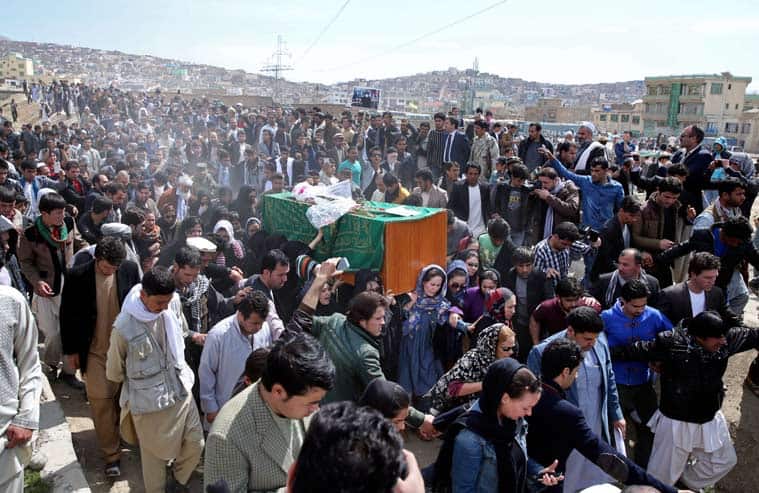 Hundreds of people gathered in northern Kabul for the funeral of Farkhunda, who like many Afghans is known by only one name. (Source: AP)

Some Afghan officials and religious leaders sought to justify Farkhunda’s killing, alleging that she had burned a Quran; these claims remain unproven.

The city’s head of criminal investigation, Mohammad Farid Afzali, has said Farkhunda suffered an unspecified psychiatric illness, but a neighbour told The Associated Press that she was nearing the end of a religious studies course and preparing to become a teacher.

“Everyone respected her, she was very religious and never left her home without covering her face with a hijab,” said Mirwais Afizi, 40, who said he had lived on the same lane as Farkhunda’s family all his life. “We never heard anything about her being mentally ill. She was about to graduate,” he said.