If you thought you have seen enough adverts this World Cup, then think again! (Source: AP)

Do you think that there are too many advertisements in cricket telecasts? Well, take it from us: it could be a whole lot worse.(Full Coverage| Venues | Fixtures)

For, there are a number of ad opportunities that are still passing under the radar of advertisers and TV space sellers. So the next time you see an ad during a cricket match, count your blessings, for it might well have been worse. Here are seven ‘maukas'(opportunities) that the ad community is missing out on:

(note: there are more, but just as a cricket match in the World Cup has an over limit, so too do we adhere to word limits. Ad companies can approach us for a fee, of course!)

Oh yes, it is a mystery for us why the toss of the match passes off in ad-unfettered peace. For, there are a host of opportunities screaming out to be taken here. The coin could be paused mid-air, and a banking ad could be played, or one could wait for the coin to fall and before the skippers can do anything, throw in an ad about life being a toss up where the coin does not always land in your favour which is why you need…insurance!
Opportunity for: Banks, Insurance companies, Financial Consultants, Mutual funds
Proposed line: Do not leave life to heads and tails/ Life is not a toss up!

Batsmen walking out to bat

Again, a golden opportunity. Batsmen almost always walk out in helmets, so what better time to throw in a promotional message about the virtues of wearing helmets(because you don’t drive only on the pitch) and of course, the consequences of not wearing one. Oh yes, we can see insurance agents and helmet manufacturers rubbing their hands with glee at the notion.

Opportunity for: Insurance companies, Helmet manufacturers
Proposed line: Drive safely – on the road and on the pitch.

Bowler handing the umpire his cap/sweater 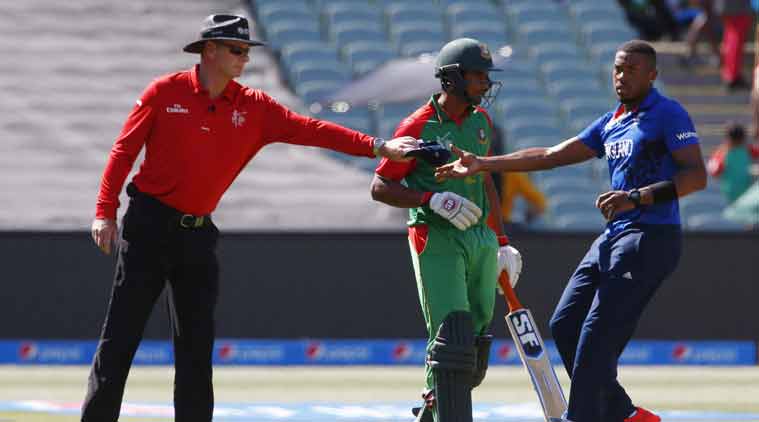 We cannot believe that this has not been cashed in. This is a classic time for the personality development and self-improvement crew to jump in and point out that there is more to life than carrying other people’s burden (so what if it is your job) – heavens, if you had been assertive enough, bowlers would have been carrying your coats and hats along with them on their run ups. Cosmetic companies too can chip, advocating using certain deodorants that will turn the hand-me-down bowler into gas…(just a thought)
Opportunity for: Perosnality development courses, Gyms, Fitness trainers, Cosmetic companies
Proposed line: “Main leta nahin, deta hoon”(I don’t take, I give)

Every time a pace bowler runs in to bowl

Unlike spin bowlers whose bowling seldom leaves time for advertising, pace bowlers come off long run ups and well, there is ample time for a quick ad to be shown as they steam in. Anything that pertains to covering distance or speed can be advertised.

Proposed line: “Always on the move”/ “Keeps running in to deliver, day after day”

An appeal for a dismissal There are few things as exciting in cricket as a bowler and his fielders appealing for a wicket. And the simple “owzat” has now been replaced by theatrics that go on for a while, and we think that this provides enough time for an ad to be slipped in. Legal firms could take the chance to boast of getting the right decision and of course, cosmetic companies could tell users how wearing the right gel, fairness cream or after-shave could help you get a decision in your favour.
Opportunity for: Legal firms and consultants, Cosmetic companies
Proposed line: “No appeal is hopeless with us”/ “Kash maine dark and lovely lagaya hota to ye din na dekhna padta” (“If only I had applied Dark and Lovely, I would not have had to see this day) – to be used when appeals go against the player/ “Muh pe Dark and Lovely, jeb mein umpire” (“Dark and Lovely on your face, the umpire in your pocket”) – to be used when the appeals to in favour of the player.

Referral to the third umpire

Even as those on the pitch wonder whether a batsman is out or not, one can slip in an advertisement. This could pertain to insurance (just like third umpires, life can be uncertain) to investment exhortations asking people not to leave their destinies in the hands of third parties. Of course, high end smartphone manufacturers could have a try too, advertising how the slow motion capabilities of the cameras on their phone make you a third umpire of your own life!
Opportunity for: Insurance companies, Banks, Mutual funds, Investment advisors, smartphone and camera manufacturers.
Proposed line: “Don’t wait for someone else’s decision”/ “For in life, there’s no action replay”/ “Aim, shoot, slow-mo, and be the third umpire whenever you want” This is an absolute gimme, we think. As r the catch is taken and all converge on the catcher in glee, or as the poor chap who has spilled the catch writhes in agony and his teammates try their best to look supportive (no matter how many mental lashes they administer to him in private), the time ir prime to air an ad about well…adhesives.
Opportunity for: Glue and adhesive manufacturers
Proposed line: “Make everything stick…even chances!