‘Bajrangi Bhaijaan’ also features Kareena Kapoor and after the duo finishes off with their shoot schedule in Mumbai, the next schedule is slated to be shot in Kashmir.

Change is the only constant and hence, Salman Khan, keeping this in mind, has tweaked his tweeting and instagramming habits a bit.

So, while earlier we used to be confused over his cryptic tweets and insta-pictures, now we are getting a dekko into the sets of his upcoming movie ‘Bajrangi Bhaijaab’ directed by Kabir Khan.

Salman Khan, recently, took to Instagram to post two behind-the-scenes videos from the shoot of the movie.

Reportedly, the videos are from a song titled ‘Beta Le Le Selfie’ being shot at Film City, Mumbai. Dressed as lord Hanuman, kid dancers groove to the beats while entertaining Salman, who too occasionally matches or tries to match the steps.

Salman also posted a picture with these tiny dancers.

‘Bajrangi Bhaijaan’ also features Kareena Kapoor and after the duo finishes off with their shoot schedule in Mumbai, the next schedule is slated to be shot in Kashmir.

Kabir Khan’s wife and anchor Mini Mathur also took to Twitter to post pictures from the sets, featuring Salman Khan, Kabir and herself. 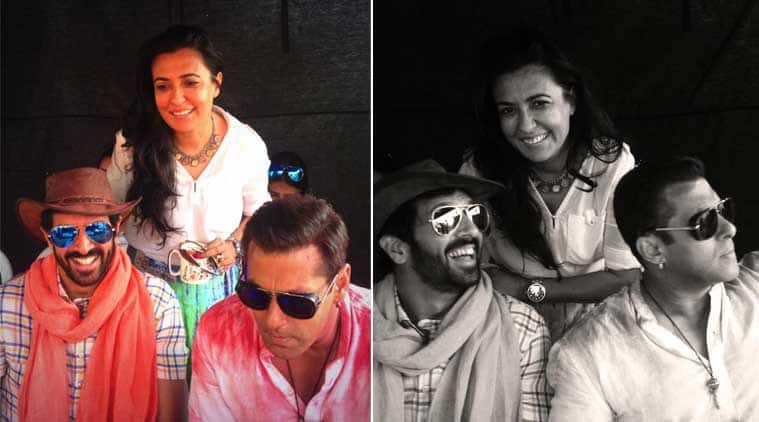 Slated for a July 16 (Eid) release, the movie follows the love story of a Muslim man (Salman) and a Hindu Brahmin girl (Kareena). The movie is also said to be based more on the father-son relationship as the characters of Salman and Kareena would meet a lost Pakistani kid and help him find home.