Sunny Leone Rannvijay Singh have starred together in a fun music video, dancing to a song called “What Women Love” to promote the forthcoming show “MTV Splitsvilla 8″.

Actors Rannvijay Singh and Sunny Leone have starred together in a fun music video, dancing to a song called “What Women Love” to promote the forthcoming show “MTV Splitsvilla 8″, which they are co-hosting this time.

To launch the cult show with ‘The Way to a Woman’s Heart’ core and theme, the channel officials have made a virtual short version of the show and packed the concept into the music video.

It contains various fun suggestions on ‘What you should learn about what women love to woo them’. Sunny and Rannvijay are seen as a couple, dancing and romancing away, playing out the various suggestions in a Broadway style stage-play, with Sunny leading the suggestions because she knows best, whereas Rannvijay is the good boyfriend who is seen doing the right thing.

“Sunny’s the perfect teacher of the subject, and Rannvijay is the perfect student and the perfect ‘good boyfriend’ from whom Indian boys should take an example,” said a statement from MTV.

Both actors enjoyed the experience.

Sunny, who is hosting the show for the second time, said: “It’s great that I have Rannvijay with me on the show this time. I’ve seen him on ‘MTV Roadies’ and I know he can be tough as nails and a stickler for discipline, but also has a goofy fun side to him.” 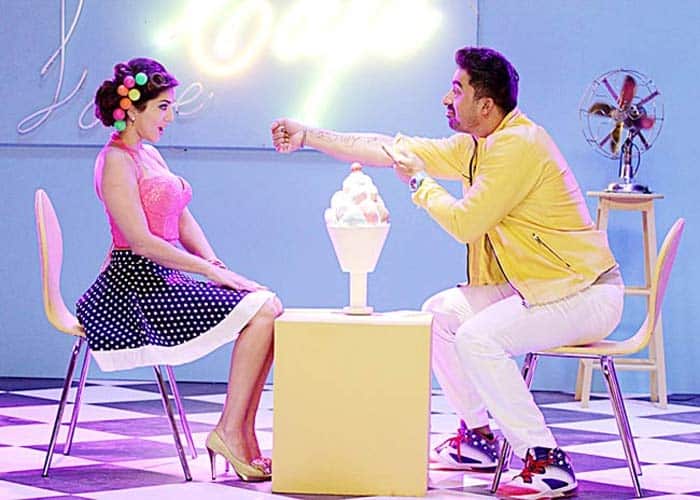 Rannvijay said: “Sunny Leone was a gorgeous surprise who added a lot of oomph and charm to the last season of ‘MTV Splitsvilla’. I’m really excited to be working with her this season. She’s known for her professionalism and her ‘sunny’ attitude, and I think we’ll get along very well working together.”