The newborn calf and its parents in the Vazhachal forests in Kerala on Wednesday. (Express Photo by: Ajay Krishnan)

It was an unusual sight — a herd of about 20 wild elephants standing guard around a newborn calf and its mother, blocking the road for nearly six hours, in the Vazhachal forest area in Thrissur district on Monday.

About 20 wild elephants standing guard around a newborn calf and its mother.

“A wild elephant gave birth to the calf in a rather steep area of the forest. The calf may have rolled down to the road, or its mother may have gently pushed it. Even the tribals living in the area noticed the elephant and its calf only after they reached the road,” said forest section officer P A Anoop, who went to the spot.

The elephant and its calf were spotted on the road around noon. Soon, other elephants started trooping in, gathering around the mother and its calf. As many as 20 elephants were seen moving in the area. 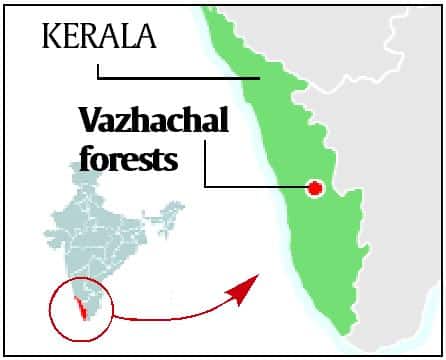 The forest officials then blocked traffic within a seven kilometre radius. By late afternoon, the rest of the herd returned to the nearby forest while two elephants remained with the calf till about 6:30 pm. The mother and the calf later retreated into the forest.

While the Vazhachal forest area is known for its elephant population, Anoop said they did not have any information on a pregnant elephant. “We hope the elephant and its calf returned to the forest. We searched for them Tuesday and Wednesday, but could not find them,” he said.